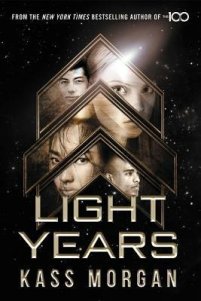 This was a fast paced, exciting read that once I started reading, I couldn’t put down. With a great cast of characters and a unexpected ending, I cannot wait to see what comes next.

When Quatra Fleet Academy finally begins admitting students from every planet in the solar system after an attack by a mysterious enemy called The Specters, four students, Tridian citizen Vesper who dreams of being a pilot, wisecracking captain Cormack, outsider Arran, and Orelia who is hiding a dark secret, from different upbringing must out their differences aside and team up to defeat the enemy.

Light Years is written in third person and revolves around four students, Cormack, Vesper, Arran, and Orelia. All four characters brings a unique perspective and background to the story. Cormack, who takes his brother’s place after he passes away, takes the opportunity to make a better life for himself than the one he was born into. Vesper, the daughter of a high ranking military official just wants to prove herself. Arran, my sweet cinnamon roll, just wants to find a place where he can be himself, and Orelia is a spy for the Spectors. All four characters grow through the story and we see them start to become themselves, but this is only the beginning. They still have a lot to learn and more to grow, but this is such a promising beginning. I related to some of the characters more than others but each character had something for everyone. I was fully invested in each of their lives.

Previously, I had read Kass Morgan’s The 100 series, so I was already familiar with her writing and knew what to expect. Kass Morgan’s writing is detailed and gives enough without being overkill or too much, which made her world building that much more fun to read. We get a good sense of the world all four students come from, as well as a bit of their upbringing and their lives before coming to the academy. Although, I am a little more curious about Orelia’s upbringing and would have liked to know more about the specters, but I’m sure that will come later in the next book.

What I really liked was the plot. It wasn’t just about the students in a space battle school competing with one another, the friendships and the mingling of different classes. There’s also the looming war and the political aspect to it. Light Years has so much potential and then there’s different ways that this could all go down. And with an ending like that? I was left at the edge of my seat needing to know what happens next.

Overall, Light Years was a fast paced and exciting young adult sci-fi novel about four students from different backgrounds training at an elite academy. It had a grear cast of characters that you couldn’t help but to root for and I cannot wait to see what else Kass Morgan has in store for the next book as well as for us.

*Huge thanks to The NOVL. This review is based on an advance reader’s copy courtesy of the NOVL. You can sign up for their newsletter here.

View all posts by postcardsforariel